Too racy Madam? Try on this Abridged size then...

It is something akin to being hit in the face with a wet fish when you look at your detailed book sales and see someone asked for a refund. "Why?" you ask yourself, but the publisher does not see fit to supply any feedback. Two hundred and four copies sold between 26th April and 12th June will help with the grocery bills but three people hated it enough to ask for their cash back. That is a box of babies formula!


I was fortunate that two thirds of the returnees were good enough to contact me. Both had bought the first volume for their sons but had not seen the introduction's comments about a spy removing her clothes to learn the secrets of others, as sufficient indication that there lurked some sexual content within.

" Arriving at her Kensington flat Svetlana powered up her computer and selected a classical music CD that she placed in the drive before carefully removing her hand made Italian shoes and unpeeling like a second skin the Emilio Pucci sheath dress to stand naked but for sheer black hold-up stockings.

The dress, like her looks, was a tool of her trade. Lingerie would have been visible through the £2000 garment and spoilt the desired effect had she been stopped by the police.
As the music began sounding through the speakers either side of her PCs base unit, Svetlana leaned across the keyboard and carefully placed fingers over three separate keys, and paused, letting the music flow forth. If anyone else had been present they would have observed an exquisitely formed young woman in her mid-twenties, clad only in stockings and whose tan lines and full Brazilian showed a preference for G-strings as beach wear. The gleam of Chinese gold at her nether region where a stud pierced a particularly sensitive item, and a pair of tattooed dogs paws on her right buttock gave hint of a somewhat kinky vein running beneath that chic and apparently sophisticated surface.

Apparently overtaken by the strains of Bizet’s Farandole from ‘L’Arlesienne’ and frozen in some Pre Raphaelesque pose, Svetlana closed her eyes as she listened. Thirty-nine seconds into the piece she depressed all three keys simultaneously before logging online. With the anti-tamper software thus neutralised and therefore no chance of the powerful electromagnets incorporated in the speakers from being activated and frying the hard drive, the auburn locks bounced on her shoulders and tattooed buttocks as she strode elegantly on thick piled carpets through the flat to the shower."

It is a passage that what I would describe as being more sex in silhouette than the graphic swinging-off-the-chandeliers-and-full-on-penetrative-descriptive variety.

Sex-in-silhouette would not of course find favour with ones Granny, indeed the only Granny Approved Porn  can be summed up in just four words at the end of a sentence in a book, or accompanied by the camera panning up to the sky before fading out. "And so to bed" was steamy enough for Granny, much to Granddads chagrin.
However, the feedback had value and I learned from it. *Contains some sexual content now sits as a warning at the foot of the intro, and in order to cater for the under 18's I spent an hour editing the text and cover in order to produce an Abridged Edition, which I can happily report was eventually bought by both.
Armageddons-Stand--Abridged-Version-ebook 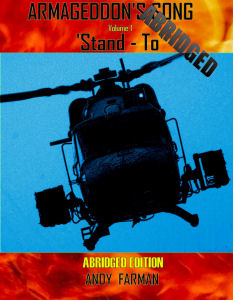