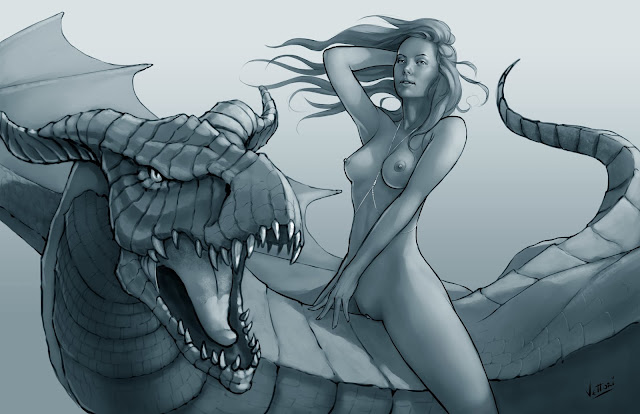 Stumble Fish followed suit at Fae’s first thought. Female rider's mind
control over male dragons was equal to that of the male riders and
female dragons. Conversely, the female dragons were smaller and mature
male dragons did not take kindly to puny male riders ordering them
about. In another season, Song Singer would begin to resent male
rider's commands. A female rider could never successfully control a
female dragon as the dragon regarded all other females of any species
as rivals. Female dragons were very territorial and more than a few
had sought out their mate’s rider, killed and eaten her.
Their heads were big, but that was due to thick bone, not grey matter.
From two hundred feet up, Fae saw a slight movement in rocks above the
canyon and the dragon swung right so as not to alert it by casting a shadow over its way.
Stumble Fish spread its wings wide and landed lightly, on the far side of an
outcropping.
Fae quickly removed her chaps and boots before releasing the leather
ties securing her hunting bow and quiver of arrows. The heavy oak war
bow and bodkin tipped arrows were overkill for what she now intended
to stalk. She next removed the belly chain, she would not need the
katana but the tinkling of the jewels and sparkle of gold and gems did
not lend itself to clandestineness. The warrior souls entered her with
expectation, as they always did, but she sheathed the long blade and
hung it down her back by its strap, safely out of the way.
Slipping noiselessly to the ground,naked but for her weapons, Fae ran around the side of the
outcrop that was still in shadow, her feet making no sound
despite the silence of the desert. Once she had gone, Stumble Fish
stepped over the canyons lip, gliding down the rest of the way to join
Song Singer and Scott.
Posted by Andy Farman's Novels at 06:38 No comments: