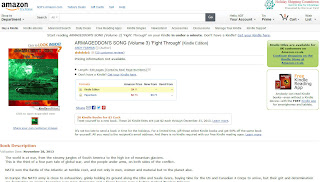 The benefits of joining Amazon.com as opposed to your own countries are quite significant. You can buy kindle books from different countries sites and save money, and you can send kindle books as gifts, which is lucrative for American authors, not that I am having a go at fellow writers in the US of course, but the ways of Amazon are bizarre to say the least.
A link back to your own country's site instead of a 'Buy with 1 Click' button, and no 'Send as a gift' button either.
According to a colleague across the way her Christmas sales increase whereas mine will be under the thousand monthly sales total for the first time ever since I published last May.

It is of course swings and roundabouts though as being a Brit ex-pat my royalties are only taxed by the Philippines, but US ex-pat authors are taxed twice, by the US as well as the country of residence.

Posted by Andy Farman's Novels at 21:18 No comments: 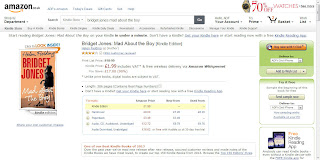 A great idea, so why is it only available in the US?

Posted by Andy Farman's Novels at 19:12 No comments: 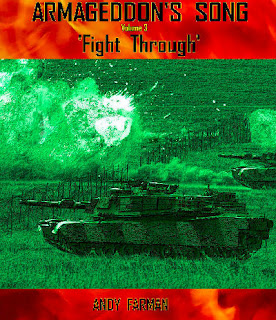 Posted by Andy Farman's Novels at 20:03 No comments:

Write about what you know, research what you do not.

Write about what you know, research what you do not.

Incorporate some of your experiences into your writing, preferably the humour of the moment but definitely nothing that could be of the 'I guess you had to be there' variety, so testing it out first is a good idea.

I had regular dealings with a certain famous theatre which was run largely by eccentric former, failed, or 'resting' Thespians of the Royal Shakespeare Company. There was no obvious structure to the management and much was done by verbal agreement, and much was done by unspoken agreement. I could go down there and show my warrant card at reception every day of the week and it would be a different receptionist (the daughter/niece of a minor sponsor) so I would have the same conversation.
"Is the Director or the Operations manager available?"
"What is it about?"
"A confidential operation."
"What is that?"
"It's confidential, sorry."
"Did you ring for an appointment?"
"No."
"Why not?"
"Because the matter is confidential."
Eventually I would get the Front of House Manager, or the Music Director, or once even the Head of Procurement (Catering), but I would eventually get someone with their own assigned parking space outside. The parking spaces were interesting as they swapped owners frequently because poor role performance was not grounds for sacking, merely a move. The Head of a Productions at the time of a poorly received play would be parking in the Head of Props bay for a while. I am sure you get the hang of how it was there.
"The Queen is coming to watch your opening night of Hamlet." and I would at that time then be able to get on with the initial organisational meeting with the SPOC (Single Point of Contact) if this was any other organisation of course, but they would discuss amongst themselves who was best to deal with the visit. 'Felicity from Accounting' was a frequent proposal. Felicity had not the first clue about Royal protocols, counter terrorism, Emergency Egress (bug-out routes) or possess any practical organisational skills, Felicity could not even count very well, but it was 'her turn' and of course she was so-and-so's daughter/niece, a major sponsor.
My shaking head was usually the sign that Felicity, no doubt a charming girl, was not the ideal first choice of the security forces of the United Kingdom.
Emergency Egress Routes were often misconstrued by former Shakespearean actors (now in management) and I can only presume that is was due to the absence of the word 'Emergency' in Billy's writings.
"What would be your suggestion of the fastest route from the Royal Box to ground level?" I once asked.
"That would be this way." and I followed the elected SPOC along several corridors and through several locked doors to the Green Room on the next floor up.
"We have just acquired this rather nice water colour, donated by a sponsor." would be the explanation "She would no doubt appreciate it in passing."
"No." I would reply.
"But she likes water colours!"
"No, you are thinking of Prince Charles, and no she would not see it as her personal protection officer will have thrown her across one shoulder and be moving at as near to a sprint as he can manage."

I did once have Felicity from Accounting as a SPOC but that was not because I had any say in the matter. It was not a VIP visit but it was one of great importance to the theatre.
She telephoned me at work one day.
"We want to kick off the theatre year next week on Shakespeare's birthday. So we are having Cleopatra's royal barge row up from Westminster and deposit her at the steps to be met by Mark Antony, is that okay?"
"How many rowers and what time are you going to be arriving at Westminster?"
"Four, and 9am to set up, why, is there a problem?"
"Does the barge have an engine?"
"No, just the willing lads from 'Props' and 'Scenery'.
"Well there are two things actually, the first is that it is a spring tide that morning and your rowers will probably be exhausted or still trying manfully as they catch sight of the Theatre Royal at Windsor...." (20 miles upriver)
"Oh.."
"And that day is the day of the London Marathon, so you would need to be in place at Westminster Pier at 2am at the latest before the road closures go in."
Google is a great research tool, but I suspect Billy did not Google much either.

My next book will be a comedy but I have to think of some way to manufacture two similar incidents into it.

Posted by Andy Farman's Novels at 23:09 No comments:

Advertising....don't get me started on advertising! 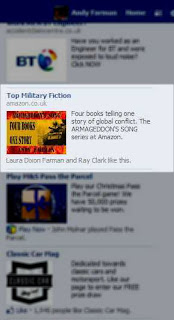 Getting it out there:
I had a disagreement with Facebook on their stupid policy regarding the amount of text allowed in an advertising poster which led to some research and a useful discovery.
As I have previously stated, if you advertise with FB you should only target your book page, be it Amazon or whoever you use. You can use this to get 'Likes' for your FB page like some attention hungry teenager, but as an author you will go hungry, literally. 'Likes' do not pay the bills.

Go on to FB and search 'Advertise on Facebook', this will link you to the process. Target your countries and audience carefully, do not 'shotgun-and-hope-for-the-best'.
IGNORE the option to post your advert in the newsfeed but SELECT 'Right hand column' as this is where 80% of 'clicks' to my Amazon page originated.
I only advertised for seven days and it cost me $50 to reach 209,566 members and I received an average 170 daily clicks to my Amazon page. Whether anyone actually bought a book remains to be seen, but there you have it. The right hand column ads work much better than news feed ads.

Of course, you need to post an eye catching ad too, but I can't help you there.

Posted by Andy Farman's Novels at 03:18 No comments: