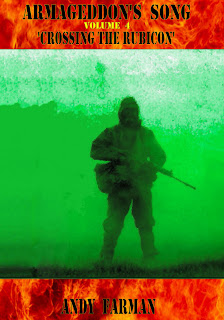 The ground crew, suited up already in the charcoal impregnated trousers and smocks but without gas-masks on, had already started up their F14 and the crew chief held up for her the weapons safety pins that had been removed. The aircraft was hers and ready for combat. Nikki was lowering herself into her seat as Candice climbed the ladder.
Candice fumbled with straps.
“Relax Ma’am.” A technician shouted and deftly connected radio jacks, oxygen and her flight-suits air bladders.
“First time?” meaning her first for real mission with war shots.
She nodded.
“You’ll do just fine!” he yelled over the engine noise.
A ground marshal’s illuminated wands signalled them forwards urgently and a moment later Nikki got the thumbs up that all personnel and equipment were now clear.
She released the parking brake.

The marshals were linked together on a stand-alone radio channel, working in unison.
“What’s an Elephant Walk, Nikki?” asked Candice.
“This.” Nikki replied simply.
The marshal waved them forward with both wands before pointing one wand angled down to their right wheel and the other moving up and back.
The Tomcat left the ‘hangar’ behind and turned right onto the taxiway.
Candice twisted around, looking at aircraft of all types that had appeared in front and behind.
“You've seen pictures of herds of elephants walking one behind the other, holding the tail of the elephant in front with their trunks?”
“Sure?”
“That’s how this procedure got its name. It’s the fastest way to get everyone off the ground but its kinda tricky.” Just as if to highlight the point the jet blast from the F16 ahead of them caused the Tomcat to rock violently.
“I guess we don’t do this that much in the navy?”
“Not until they build a carrier the size of an airbase, no.”
It was like a conveyor belt; the line of aircraft moved steadily on and as they reached the end of the taxiway the aircraft immediately turned onto the runway where scant seconds later, when the preceding aircraft were only a couple of hundred yards down the tarmac they received clearance to take off.
Every airworthy aircraft on the base was on the taxiways or hurtling down the runway.
The marshals’ job now was to keep an eye on the interval between each aircraft to avoid collisions or aircraft being flipped over by jet blast. The marshals had their respirators still in pouches around their waists and ear defenders on their heads instead.
Nikki and Candice had their oxygen masks unsecured.
Eventually they were near the end of the taxiway in third place, a marshal signalling the two F-16s ahead of them to turn onto the runway and run up their engines

A flash overhead made them look up sharply through the canopy but there was nothing to see and it was not repeated.
The marshal pointed the illuminated wands sharply down the runway and hunkered down in a squat, clear of wings and the ordnance hung off the F16s hardpoint’s.
The Falcon’s pilots opened the throttles and the two aircraft powered down the runway.
“Our turn now.” Nikki said, looking at the crouching marshal.
He did not rise and the glow of the F16s engines got further and further away. As they lifted skywards Nikki frowned.
“What’s the delay?” Candice asked, puzzled.
A cold shiver ran down Nikki’s spine.
“Put your mask on Candy!” she hurriedly clipped hers in place and ensured the oxygen was flowing.
“What?”
“Mask on, do it now!” she ordered.
The marshal remained squatting on the edge of the runway, his back to them.
Had an aircraft been making an emergency landing he would have signalled them to hold, but he had not moved a muscle.
Nikki came off the brakes and the Tomcat turned left onto the runway, but Nikki did not wait for the marshal, she immediately pushed the throttles forward to full military power, the afterburner kicking in.
“What about the marshal?” an alarmed Candice exclaimed.
“He's dead, Candice.”

Andy's books on Amazon
ANDY FARMAN on Goodreads
Posted by Andy Farman's Novels at 01:07 No comments:

Markets are an odd thing, particularly on Amazon. I am writing a series of novels about a, obviously, fictitious World War Three. There a mixture of characters from the many nations on both sides of the fight, good and bad, but America is not the focus; it is one of the players and shares the stage.
It sells very well on Amazon.co.uk with eighty plus reviews but it is not as well received in the USA with fifty odd. Those who like it the most on Amazon.com tend to be Australian rather than American, according to the reviews, which is odd as so far I have only featured a single Australian submarine and its crew.
Canada has a lot of mentions and a main character is SACEUR, Supreme Allied Commander Europe, a canny soldier. However, I think I have sold fewer than fifty copies on Amazon.ca. Looking at my fellow alternative historians I see they fare just as poorly north of the Great Lakes.

The reasons I have been given for Americans less than rapturous receipt of the book is that they are used to being the focus, the cavalry coming over the hill to save the planet, and it is not an unreasonable a viewpoint. Additionally, a vast number of Americans writing about America is going to typecast the flavour of what they expect to read.
‘Flavour’ or 'Flavor' now there is another item, spelling. I get complaints from some Americans that they find my ‘bad’ spelling an irritation. Once I have finished this fourth and final book in the series I will publish a US edition of all the books, one with fewer U’s and more Z’s and I will get back to you on how well that floats.

Foreign language translation remains beyond the means of most Indies. How the book translators have not priced themselves into extinction is a mystery as they expect you to pay their mortgage, grocery bills and kids private school fees for three months while they work on your book.
If you want independent proof reading of their work? well that is another five grand.

I would like to break into the Chinese market, it is massive and only a stones throw across the South China Sea from my house, but that not only involves a translator but an entirely different way of writing.
The State controls everything and they have a paranoia about world opinion. No novel involving Chinese aggression will see print (or pixel), no stories of China and military conquest of another country will be permitted and therefore online publications and eBooks of strange storms sweeping individuals and units back in time, or across to a parallel universe abound, because the State is happy for Chinese armoured brigades to kick 18th century Samurai ass.

If anyone has suggests, or a pair of magic red shoes to break into those markets, please feel free to share.

Posted by Andy Farman's Novels at 04:15 No comments: