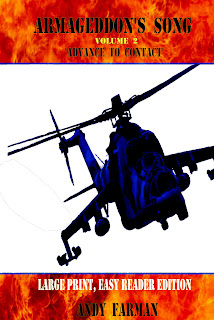 One of the hardest of his own orders that Admiral Mann had to stand by, was that of rescuing survivors. His warships and helicopters reported dozens in the water. Those downwind of the chemical warheads would have no chance, but the remainder waved, shouted and blew whistles in order to gain attention.
USS Peel’s crew were fighting to shore up bulkheads, but the only safe course of action for her was to turn her stern to the seas and put her engines astern, making for the Azores in that slow fashion, if a torpedo did not find her first.
Conrad Mann would not compromise his warships integrity by allowing seals to be broken in order for crewmen to go topside and carry out rescues. He could not allow his ships to break formation, and he could not afford to weaken his defensive screen by detaching another vessel. The same went for his rotary wing assets, he needed them hunting rather than performing SAR.
All requests to heave-to or to delay ASW operations were refused, and the winking beacons on survival rafts and immersion suits fell astern, disappearing into the cold, black Atlantic night.

Twenty-one minutes later a UH-60B from the USS Gerald Ford firmed up very quickly on a contact that was coming on too fast for caution. Within another three minutes a further two helicopters began to prosecute separate contacts, but before any could drop on the hulls they rose to launch depth and the next attack began.
The soviet hunter-killers had used well the time the helicopters had been absent, and all seven began launching within minutes of each other.
SS-N-7 anti-ship missiles burst out of the black depths in welters of spray, their solid rocket motors providing the thrust that would send them at high subsonic speed towards their victims.
Gerald Ford’s TAO saw at a glance that his remaining F-14s and F/A-18s would be of no use, their attackers were within forty miles of the nearest US ship, and the aircraft were too far away to engage in time.
Standard 2 missiles roared from vertical launch tubes, tipping over as their ships guidance systems fed them data on the incoming attack.
High above the ships, the radar operators aboard the early warning Hawkeye watched the attackers come on, locked down their firing positions to within six feet, and fed mid-course corrections to the Standard 2s. Whilst they were doing all this they saw twenty new tracks appear two hundred and ninety-six miles out.
Placing a cursor on the lead inbound the operator was surprised, he had thought that he could judge speed pretty well, and he’d have guessed that these newcomers were coming in at mach one, give or take. However the speed was Mach 2.7, and these inbounds were climbing.
Selecting the Gerald Ford’s CIC on his frequency selector he spoke quickly and clearly.
“Vampires, Vampires, Vampires…Lunch Bunch this is Eye Spy Zero Two, I have two zero Vampires, bearing 350’, Angels two five and climbing, range now at two hundred fifty-five miles!”
The TAOs reply was immediate.
“Roger, Eye Spy, we have them on the board.” A moment later the TAO came on again, this time on an air wing frequency.
“Long Knife Zero One, Lunch Bunch?”
The F-14 squadron commanders’ reply was short, and to the point.
“Go.”
The TAO told them where, how high, and a one word instruction that meant they were to hustle.
“Long Knives steer 349’, make Angels Twenty and buster!”
“Roger, the Knives are in the elevator with burners on, our heading is now three four nine.”
“Roger Knives, you have the fast moving vampires which are now levelling at Angels Thirty.”
“Rog.”
Long Knife Zero One had only four other aircraft with him, the remainder having already emptied their hard-points in the previous attack. Between the five of them they had eight AIM-54 Phoenix, and fifteen AMRAAMs. Sat in back the RIOs assigned weapons to targets, and fifteen seconds later the first AIM-54 left its hard-point.
Unlike the weapons released by the attack hulls, the newcomers were not configured to single out ships; they had sets of coordinates to aim for.
In the USS Gerald Ford’s CIC, Admiral Mann knew without asking that this was the soviets big effort, their last chance at stopping desperately needed reinforcements and supplies from reaching Europe.
The twenty fast approaching missiles were heading for the protected zone within the twin rings of warships, and they all had to be nukes.
“Make to all ships, brace for nuclear strike…tell the inner pickets to make for the outer screens at flank.”
The plot showed all his airborne assets, and some were too damn close to them.
“Get the helo’s down, those that can do so in the next three minutes, it’ll take too long to secure them beyond that time…tell the rest, with the exception of Eye Spy and the Long Knives to beat feet.”
The young officer at his elbow turned to give the orders and then paused.
“Beat feet to where, sir?”
Conrad half smiled
“Anywhere but here, son.”

Andy's books on Amazon
Andy on Goodreads
Posted by Andy Farman's Novels at 01:18